On the 19th of this month I co-hosted a baby shower with two other girls for a neighbor. As of now, our only thank-you notes have been in the form of text messages. Not cool.

I'm still not over my disappointment with Jim Parsons not winning an Emmy.

Had a great time checking out as many of the new television shows as possible during premiere week. Glee and Fast Forward have now been added to my DVR schedule.

I'm so grateful the flooding that went on around here last week largely bypassed me.

Saw both Christine Lahti and Delta Burke on television shows recently. I don't know exactly what they've been doing to themselves but feel very sure it involves botox and collagen injections. Ladies...stop...seriously.

The boyfriend had to fly up to NJ today. His mom is in the hospital being evaluated for passing out...or blood pressure issues...or hip pain. The drama queen sister of his can't keep her stories straight. Never met the woman and I already know I don't like her. Hopefully he can come home Friday or Saturday.

Maggie seems to be recovering well from her knee surgery. And here I was so worried about keeping her quiet: 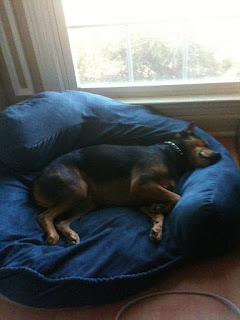 Jeez, I can't believe I haven't blogged this yet [brain fart, brain fart]!

September 2nd was the date of my six-month visit to the MS Center to check the status of my lab rat-ness.  I was expecting the usual results because September is oftentimes not a fabulous month for me.  I don't think my MS likes the changing of seasons.  If I'm going to flare though, I'm usually starting to feel wonky in late August and am probably on steroids by the end of September and this year has not been a problem for me at all.

Imagine my surprise - and disappointment - when my research nurse called me two days later and put me on a "drug holiday" because my leukocytes had fallen below where the study parameters require them to be.

According to this website I found,  White Blood Cell Count Measures the number of white blood cells in a microliter of blood. Normal values range from 4100/ml to 10900/ml but can be altered greatly by factors such as exercise, stress and disease. A low WBC may indicate viral infection or toxic reactions. A high WBC count may indicate infection, leukemia, or tissue damage. An increased risk of infection occurs once the WBC drops below 100/ml.

I don't know where I have been, other than to say my nurse said I had to be 600 or greater to even enter the study.  Six hundred whats I don't know, but I was at 180 on the 2nd.  I gave up more blood last week and am at 400, still not quite enough to restart the study yet.  I'll be retested in mid-October.  Dammit!

Well, this confirms for me that I am on real drug.  Fingolimod is known to cause leukopenia in some lab rats.  The hope is it will just suppress some immune function, specifically the part that attacks myelin, not wipe the whole operation out completely!  To repeat...dammit!
Posted by Anne P at 8:46 AM No comments:

This area is zoned Stress-free

Yes, I absolutely watched President Obama's speech last night. Yes, I have an opinion. No, I'm not going to talk about it here. There are pa-lenty of other web sites where I can talk about it. Not here, I want this little piece of the world to be a place where humor can thrive and visitors don't even need to have a full contingent of working brain cells.

It's kind of an awesome day today. While it's been overcast pretty much constantly, there has been almost zero humidity and a great breeze. I took Little Bo for a short walk and didn't even come close to overheating (yay).

The other dog - Maggie, a.k.a.Maggiedoodle - had knee surgery today and is spending the night in the doggy hospital.

Six weeks of crate confinement is in our future for her. Whoopee! 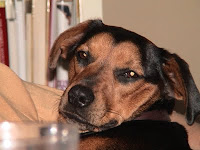 Honestly, I have really no damned good reason for not blogging. I think maybe it's because I'm really boring and if even I am not interested in me, why should anyone else be, eh?

Wanna hear something cool, though? I read this absolutely fan-TABULOUS book called, "The Easy Way to Stop Smoking". A neighbor of mine mentioned it last Spring and was raving about it. I figured what the hell, it wasn't expensive, I'll give it a whirl. Believe me, no one was more surprised than me when I snubbed out my last cigarette and haven't looked back. That was on July 22nd.

Here is a link [I hope] to an Ashton Kutcher interview with Jay Leno where he talks about the book. The way he describes it sounds like he's b.s.-ing, but he's not. It's crazy.

Even cooler? Since quitting smoking, my cholesterol has gone from 269 [yes, that's right, two hundred sixty-nine] to 197. While I can maybe give a statin a little credit, quitting smoking really gets the most. Primarily because I am not particularly compliant with the statin because it makes me feel kind of shitty.

THOUGHT OF THE DAY: Sometimes, I'll watch a movie that I watched when I was younger and suddenly realize I had no idea what the f was going on when I first saw it. [from an email]
Posted by Anne P at 5:35 PM 1 comment: