what's been going on 'round here.

Well after being put on a drug holiday in November the predicted (by me) relapse in arrived in early January. Emotional mess, fuzzy vision that became double vision, walking issues that resulted in a couple of near-face-plants into floors and doors, the whole Magilla. One round of steroids reduced the severity of the relapse but didn't totally stop it. Second round of steroids in February finally shut it up but the recovery took the entire month of March, pretty much.

My mother-in-law, the drama queen, managed to scare my husband into making a visit out of state. As usual, his arrive prompted a turnaround. For a day. His next three days were spent listening to her berate him in whatever language she chose to use at the moment (English, Ukranian, Russian, German or a mish-mosh of each). He came home convinced he had seen her for the last time. As it happens, he was right. She'd been working hard to make death happen the past couple of years and finally succeeded earlier this week. Thoughts on that, in no particular order are:

- She can't manipulate him any more
- It sucks that she spent her last few years of life in a nursing home. That was her worst nightmare.
- I get the best, most restorative sleep when I have the bed to myself. Now that there are no more trips out of state to see his mom, my husband has no reason to travel. So, there go my opportunities for an occasional quiet night. Shit.
- It's interesting to me how I can cry at the drop of a hat to TV shows, abused animals and injured children but not to the death of a relative. Maybe because they're older and lived long, productive lives and should have no regrets? Notice I said "shouldn't" not "had no". If you die regretting something you did or didn't do, you have nobody to blame but yourself, don'tcha think?

Well, enough about that.

Agnes the rescue kitty is coming up on her 20th birthday. She's blind as a bat and might have 3 teeth in her mouth on a good day, but she's still an ornery, demanding bitch who still scares the dogs to death. She's amazing.

Next up: Why I Quit My Job as a Gilenya Guide. That's a multi-part post but it still smarts and is really hard to write about. Maybe if I could get my hands on a Valium or two...

I put this together today. My mom and the dogs she grew up with. 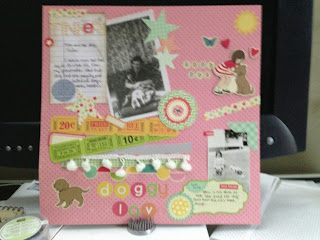