So, things are getting tight around here. My job ended on March 14th, with a possibility of being resurrected at a future date. But the future, as we all know, cannot be predicted. And my husband's job ended shortly after we entered the year 2014. I should probably be freaking out but I'm really not doing too bad. For some reason I'm optimistic that we're just going through a temporary lull and everything will work out in the end as it should. I simply can't believe "the powers that be" ever want any individual to suffer more than they deserve and I think I'm a good person so there ya go.

Okay, so that was way too long an intro to this post. Recently we've been taking a long hard look at our house and the miscellaneous THINGS we have accumulated over the years when we both had good, steady jobs and lots of discretionary income. It's time to clear the clutter. Both my husband and I come from families that saved everything, passing them down to their children and grandchildren. That's us. Yay.

There used to be a show on TLC called "Clean Sweep" where a team of like three people would totally empty out a cluttered room in someone's house and teach them how to purge stuff. The purgemaster (my word) was a guy named Peter Walsh and I was in love with him and how he taught people to get real about why it was they felt they needed to bury themselves in possessions either inherited or purchased. That show was on right around the time my grandmother was downsizing her own place and my brother and I were getting van loads of stuff she wanted us to have. At the time I really thought I was in absolute love with everything she gave me and I was so grateful to have it all.

Then she died and my brother, sister-in-law and I spent a weekend in her condo to pack everything up, sell what we could, bring home what we wanted and donate the rest. Fast forward eight years and look at what I have to fricking dust:

An oil painting of my three-times-great-grandfather. It's gorgeous and in fact my husband built a mantel that he custom made just for that painting. It's staying.

My mother's 10-piece set of wedding china (she died when I was 10 and my grandmother saved it for me bless her heart). Very pretty and totally not my style. Apparently it's not anybody's style because it's been on both ebay and Craig's List multiple times with no nibbles. Same with tea cup and saucer sets, cream and sugar pitchers, finger bowls, etc. All these things are English bone china with very well known logo's. I guess people don't collect china patterns like they used to.

And don't even get me started on the Hummels. Between my grandmother and my mother I bet I have two dozen of them. I like them very much, but I really love only three and the rest have got to go.

A china cup commemorating Queen Victoria's Diamond Jubilee in 1897. And the one from when King Edward was crowned. He's the one who abdicated, so his brother George got the job. And I've got the cup. Then Elizabeth. Yep, I have her cup too. My grandmother had cousins in England and they sent her the cup commemorating Charles and Diana's wedding - the only one I'm interested in keeping, if just for the kitsch factor.
Posted by Anne P at 12:12 AM No comments:

I’ve been a voter in Georgia since 1980 and I’ve got to get this off my chest.

Georgia has 14 congressional seats and Republicans have held a two-seat (8-6) majority since at least the 2010 census.

I think a lot of heads across the country exploded when Georgia voters surprised everyone by electing Joe Biden for President in 2020.

Despite three (I believe) recounts, as well as several phone calls to the GA Secretary of State, election officials didn’t “find” enough votes to overturn the election results. Therefore, Biden was awarded our electoral college votes.

Then, adding insult to injury, Georgians elected democrats to fill our two Senate seats, in January of 2021.

So, what did Georgia GOP officials do? Why, they created a new statewide districting map, increasing their majority from two seats to four (9-5).

They will not tolerate a repeat of 2020.

As a voter who selects the Democratic candidate over the Republican more often than not in state elections, losing is not new to me. It’s part of my “blue dot in a red state” life. After a good pout, I shrug and say, “You can’t win ‘em all”.

Just not here. Apparently I'm not interested in my own self to even tell anyone else about me. Work has been excruciatingly slow so I spend many hours on Netflix, Amazon Instant Video and crafting. Y'all be well, OK? I'll pop back sometime soon, I promise. 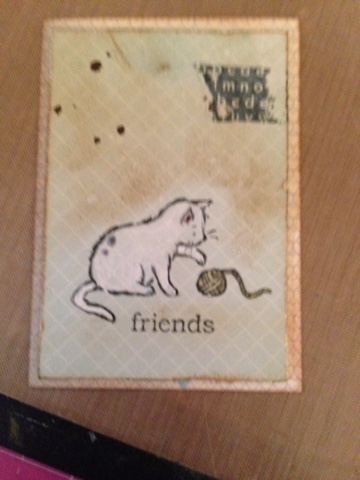