Since my last transmission...

...some news. I'm drag-ass tired, so here are the headlines. More details will follow.

1. We're fostering a rescue dog. He's great and Maggie gets along with him so he'll be officially ours next week.

2. I passed the three-month mark in the Fingolimod study. I don't have to go back to the MS Center until September!

3. Wags' ashes were returned yesterday. Why I cremate and keep the ashes of each of my pets is a post of its own.

4. Had an interesting pedicure. That's also its own post.

OK, now I have four posts worth of stuff to write. No excuses, eh?
Posted by Anne P at 11:56 PM No comments:

My previous post is SUPPOSED to have a lot of cute pictures of Wags...unfortunately they're not moving over properly in Windows. Damn! Mark this as another win for Mac over PC.
Posted by Anne P at 10:18 PM No comments: 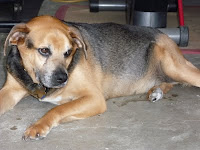 Yeterday, June 11, 2009, my first and best dog lost his six-month battle with Immune Mediated Hemolytic Anemia. He fought like a trooper, tolerating massive combinations of drug therapies and weekly blood tests by the vet. He never balked or whined...even at the end, when he was struggling to breathe and unable to stand up long enough to take a decent poop. This is my tribute.

Wags and his sister Maggie were found the North Georgia mountains by some people who decided to pick them up and give them to a friend of theirs who was lonely and decided she needed a pup. I met them the first time when they were probably three months old.

As they grew up - as puppies do - the recipient decided that maybe a puppy was not such a good idea. When I heard she'd surrendered them to the Humane Society, I jumped in the car and brought them home with me. Lucky for me they had been house- and crate-trained! They loved going for rides in the car, walks in the woods, and making new friends at the dog park.

Wags turned out to be the doofiest dog I've ever seen. He was very smart, but never a show-off. Poor guy never would be confused with the sharpest knife in the drawer, believe me. But he was the most easygoing, mellow dog I've ever known. Never did he bark at a little kid; rather, he would stand still and allow them to tug on his ears, grab his nose, step on his paws, whatever.

Back in January, Wags suddenly stopped eating. An urgent trip to the vet and lots of bloodwork diagnosed this awful autoimmune disease. Like my own autoimmune disease, a cause can't be determined. Unlike mine though, his is most always fatal within a year of a diagnosis. We tried to get his anemia into remission and, looking back on it I think we were successful for three weeks in late February - early March.

Over the course of the past two weeks, Wags was finally displaying some different moods and behaviors. Things that usually excited him became much fewer. He stopped chasing squirrels at a full-out gallop; his bark got weak; his ears didn't perk up at the mention of "dinner"; he got tired of climbing up into the car and could not jump up onto the bed when invited.

Bo and I were able to spend Wednesday night holding him, stroking him, kissing him and repeatedly telling him what a good dog he'd been and how much we loved him. Yesterday morning he told us - in his way - that he understood what was happening and was okay. So we took him on his last trip to the vet, where the final barbiturate rendered him unconscious and allowed him to peacefully go to sleep.

The house is emptier. I miss his snore and his relentless quest for treats. And his soft ears. And his big belly, which was the greatest pillow ever. And the way he would not walk past Pete the cat unless I escorted him (Pete has a fast and hard left hook).

Email ThisBlogThis!Share to TwitterShare to FacebookShare to Pinterest
Labels: grief, loss of a dog, Wags

Recently I wrote about a check written to me that bounced and some bills I paid with those funds were then returned. Today I received a phone call from a representative of the "executive office" at Capital One. They had found my blog (?) seen that post (!), looked at my account and saw that returned payments were not the norm in my record, and credited back the returned fees.

They traced me from my blog to my account, which kind of freaks me out. But even while I freak, I'm just enough of a geek to say, "Wow...cool...THAT sounds like a fun job!"
Posted by Anne P at 10:25 PM 1 comment:

Seriously, I should have known that my family/friends/readers - most of whom can manage to put out a readable blog of their own - would know what the title of mine meant...so I've removed the lame-ass title change I spewed out the other day.
Posted by Anne P at 6:28 PM No comments:

Simply amazing. Everything is fine as long as I stay in my air conditioned house, right? Then I have to go outside, even for something as minor as walking down the driveway to check the mail, which usually arrives between 2:00 and 3:00 in the afternoon. By the time I get there, both hands are tingling and I'm wobbling. It's like instant. An hour ago the temperature was 64. Now it is 72. By lunchtime it will be mid-80's, by late afternoon will be about 90. God I hate the Deep South in the summer...and it has just begun.
Posted by Anne P at 8:57 AM 4 comments: