Just when you think you know someone...[A Long Story]

I've been struggling with a recent event that absolutely begs to be a blog topic. Every time I think I've got it outlined and ready to go, something else occurs to me, then I try to add it but it only results in my practically rewriting the whole bloody thing.

- My friends of over 20 years, Nita and Jim came to the conclusion they have to walk away from the mortgage payments on their condo and let the bank take it. They told me their plan about three months ago.

- A lovely relative in another state offered them a place in her home. They told me this about two months ago.

- They had a move date of October 24th. They told me this in mid-September.

- I offered to bring over breakfast on the morning of the 24th, to give them fuel for their journey and also to visit with Nita's sons whom I've known since they were young teenagers.

Moving Day
- I arrive at 9:30 in the morning. The 24-foot long truck they rented is about 75% full. Inside the house is a mess, with so much stuff still to be packed and loaded that I can't imagine how they're going to get it done.

- Nita seemed to wander around directionless and Jim was surfing the web. Nita's sons were running around, packing for them. Since I wasn't there to actually work - and they hadn't warned me how much was still left to do - I just walked around unplugging electrical things, tying the cords up all neat and organized, and placing them by the front door. Things were grungy and kinda smelly, which I blamed on sloppy housekeeping and the fact they both smoke.

- 1:00 in the afternoon, one of the sons was disassembling a bird cage [yes, they have two birds] when I realized he was going to lose his grip on a piece of the cage. While he looked at me with a face that said, "Oh, shit!" I looked down at the falling section and saw the thickest crust of old, dried bird shit I've ever seen in my life. I put my hands up and said, "I've got a compromised immune system and I'm not wearing gloves, sorry dude, can't touch it." He said something like, "Oh, no, don't worry," and "I don't want you to touch this." He meant it, he has always been a sweetie. I left shortly thereafter.

- 4:00pm, they are ready to take off but Nita calls to tell me they can't find their cat. I advised her to sit quietly in the place, by herself, and gently call for the kitty. I'm sure kitty was freaked out by the racket all day and was hiding somewhere. Either that or she ran out one of the open doors.

- 4:20pm, Nita calls again. They are on the road. Didn't find the cat. Left me a key under the front door mat, would I go by the place and see if I can find the cat, capture her, bring her to my house and keep her for a couple of weeks. They'll drive back down to get her. I agreed to do so but made it clear her cat needed to be checked out by my vet before she'd be allowed to interact with my animals. Nita agreed.

- 8:30pm, Bo and I go back to see if we see the cat anywhere. I swear to you, we entered an episode of that A&E reality show Hoarders. Garbage all over the place. Stacks and stacks and boxes and boxes of newspapers. The newspaper was what they trained their two dogs to pee and poop on. In the dining room. A bucket of water with a mop left in the kitchen. There had been some kind of an insect infestation in the pantry and by the look of it, this occurred last spring or summer, but neither one of them cleaned the dead bug bodies out. Kids, I can bore you to death with details, but what's the point, right? Suffice to say, Bo and I put on masks and gloves right away.

- 10:45pm, we're back home. Didn't see any sign of the cat, but Bo struck a rummager's treasure in their basement. Tools and home project materials that really only a guy can appreciate. Me, I found animal droppings of some kind [probably rodent] and something that looked like black mold. Honestly, I was down there less than five minutes before feeling faint and queasy and Bo had to help me out the basement door for air. It was at that moment I began referring to the place as a bio-hazard.

The Next Day
Bo was so pumped by all the cool "guy" things in the basement that we didn't have room enough to take out the night before, he wanted to go back. I didn't want to go, but he didn't want anyone to think he was a criminal or something, so I rode along and stayed in the truck. He was probably loading his goodies into the truck for two hours. Through the window, I saw the cat! So I went inside, mask and gloves securely fastened, and made sure she had plenty of food and water. I called Nita and Jim and they were very happy.

The Second Day
We took a night off. I picked up a fresh bag of litter and a clean box.

The Third Day
I stopped by that afternoon. The kitty was sunning herself in the front window but she disappeared before I got out of the car. So, I just replenished her food, gave her fresh water and set up the clean litter box.

The Sixth Day
We were not leaving without the cat. We met up with another friend of Nita and Jim's who I found out was the person who - with the help of his wife and kids - packed and loaded the moving van up to the point where it was when I had first arrived on moving day. Nita was useless and Jim was glued to the computer. Anyway, Bo caught the cat, and he and the other guy divvied up as much as they could, then we came home. I set the cat up in a relatively large crate here, with water and kibble and yet another clean box. We left her alone the rest of the night because the poor thing had been traumatized.

The Seventh Day
I called and spoke to Jim. Told him we got the cat, she was fine and had an appointment with my vet the following day. I also made sure Nita had told him that she had promised to reimburse me for the vet bill. He said absolutely, sounded happy and thanked me.

Less than three hours later, Nita calls me. She says, "Jim wanted me to tell you to just have the cat put to sleep." I said, "Why, is she sick? Or, does Jim just not want to reimburse me the vet bill?" She said, "No, of course we'll pay you, he just doesn't want to inconvenience you guys because we don't know when we're going to be able to get back there." I said, "Well sorry, I am not going to kill your cat. And unless my vet finds a fatal illness when he examines her, he won't either. So, just don't even think about it, I will make sure your cat finds a good home."

The Eighth Day
Some conclusions were reached over my morning coffee. Friends don't do to friends what they did to me. Friends of mine don't abandon their pets. And finally, I have let go of toxic situations, people, even some family members since my diagnosis. Nita and Jim are now toxic. Buh-bye.

Anybody want a cat? 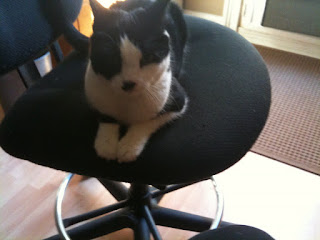