Can you hear me now?

Holy shite, I can't believe I haven't posted since November 4th! The few readers I did have are probably gone to the winds, having stopped following me, deleted any links to this blog, washed this Anne right out of their hair.

I have a good excuse, really I do! Lots of them actually. Some happy, some stressful, you don't want all the gory details.

First, an update on Jim and Nita and the cat: I got a phone call from Nita the first week of December sounding all pitiful about how she was having dreams about her cat. Was it a pleasant conversation? Not really, but it wasn't what I would call ugly. I told her the cat is fine and I'm still searching for a home, but she's pretty content here. Nita surprised me (not) by saying she has no idea when they are going to get back this way to get puss. I told her - as nicely as I possibly could - that I no intention of returning the cat to her. Ever. There's not much more to add, other than they still have not reimbursed me for the vet bill. Again, no surprise.

So now, drama, drama, stress, drama, drama ad nauseum, with some light and happiness thrown in. On Thanksgiving Day and totally blindsiding me, Bo got down on his knee and proposed. We were at my brother's house and the whole family was there. Like I said, I was stunned and happy/scared, sobbing, laughing, probably blabbered like an idiot for the rest of the night, it was great. The only negative thing I can say about it is he pulled this stunt before dinner, so I have no idea what I ate. Knowing what kind of a rockstar cook my sister-in-law is, there is no doubt I had a perfect meal. Just wish I could remember it.

So anyway, we're getting hitched soon. I'll tell you all about it after, it's going to be fun. As fate would have it, we can exchange vows on a date which coincides with the 50th wedding anniversary of my (late) parents. Pretty cool, huh?

Oh, and by popular request, here's a pic of the ring. The setting is actually being replaced, but the jeweler can do the majority of the work without the stone, so I didn't have to surrender it. Soon, this guy is going to call me and I can trot down to his store and watch him put the stone in its new home. I'll post a pic of that one, too (and it won't be taken with my phone). 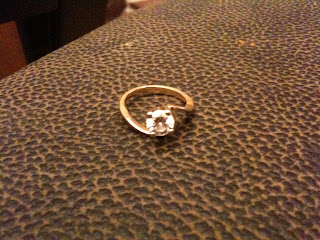